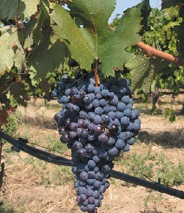 Mavrud is an old red grape variety cultivated in Bulgaria since ancient times. The birthplace of Mavrud is the area around today’s city of Plovdiv in the Western Thrace wine region, part of the Thacian Valley. The name Mavrud is derived from the Greek word “mavro”, which means black. This is probably because the skin of the Mavrud grape is bluish-black.

The Mavrud bunch is large, winged and relatively heavy. The grapes themselves are small and spherical with thick and tough skin. Mavrud is a late ripening variety – the grape ripens around mid-October in the Plovdiv area – and it is not resistant to cold temperatures. That is why Mavrud thrives best in the warmer parts of Bulgaria with deep, fresh alluvial soils. The highest concentration of Mavrud vineyards are in its birthplace – the Plovdiv region (especially around the city of Asenovgard) and also in some areas around Pazardzhik, Stara Zagora and Pomorie (at the Black Sea coast). Recently, Mavrud has been successfully cultivated in the Eastern Rhodope and Sakar region, as well as in the Melnik area.

The wines made from Mavrud have a deep ruby colour, enough tannin and acids and a pleasant blackberry and prune aroma. Mavrud wines develop perfectly in contact with oak and acquire a powerful and complex aroma, supplemented by full-bodied, dense and harmonious taste.

Mavrud is probably the most highly valued local grape variety. Foreign wine experts point to Mavrud as the local grape variety that is most likely to become internationally recognized in the near future. Apart from single variety wines, Mavrud is often used in cuvees where it leaves its distinct blueprint and provides for an interesting blend of flavors.

As any legend, the legend of Mavrud has a few slight variations. In the early 9th century, the Bulgarian ruler Khan Krum issued the first universal laws of the land. These laws forbad drinking alcohol, among many other things, and ordered the uprooting of all vines in the country. The Bulgarian state became immensely powerful during Khan Krum’s rule, who conquered vast territories mainly to the north in today’s Romania and Hungary. Krum’s army was undefeatable and one young man in particular excelled in battles. Upon return from yet another successful military campaign, Khan Krum decided to pay a visit to the mother of the brave young man to show her his respect about the way she had brought up her son. The powerful ruler showed his appreciation for the skills of the young boy and asked his mother how she raised such a strong, fearless and courageous son. The mother humbly replied: “Mighty Khan Krum, I need to confess something to you. Here in my backyard I kept a vine tree despite your orders. Every morning I was feeding my son with wine and bread and that is why he came out to be such a strong man.” Instead of punishing her, Khan Krum allowed her to keep the vine tree and named it after her son. Needless to say, her son’s name was Mavrud.