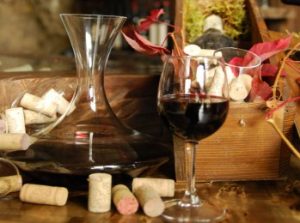 Bulgarian wine has undeniable taste qualities. It is worldwide famous and has won many international awards. Merits for the great taste of the Bulgarian wine are the specific climatic and geographic characteristics, as well as the ancient tradition in the field of viticulture and winemaking.

Wine has been cherished in these lands ever since the time of the Thracians, who first inhabited the area. They used it not only as a drink on the table, but also for many of their religious rituals. They believed that through wine they were reaching their gods. The ancient Greek god Dionysus and his Thracian analogue Zagreus were worshipped by the Thracians as gods of wine and happiness. Evidence for the ancient Thracian traditions in wine production and consumption are the magnificent Thracian treasures, which most often consist of wine sets and accessories.

Even Homer often mentioned the superior qualities of the Thracian wines in his works.

After the establishment of the Bulgarian state in the 7th century, these traditions in winemaking were inherited, preserved and continued. Many medieval travelers, who travelled across the Bulgarian lands, mention the qualities of the various wines they have tasted on their way. In the late nineteenth and early twentieth century the viticulture and wine making were already approached professionally and the foundations of the modern Bulgarian wine production were laid. Nowadays high quality wines from Bulgarian producers can be found all over the world.