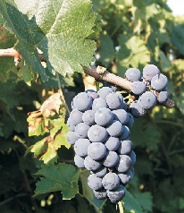 Gamza is a red grape variety that has been cultivated in northern Bulgaria since ancient times. This grape variety can be found under the name Kadarka in most of the other Balkan countries, Romania, Hungary, Slovakia, France, Austria and Turkey.

The bunch is large, cylindrical-conical and compact. The grapes are dark-blue to bluish-black and their skins are thin and frail. Gamza is a late-ripening variety – it ripens at the end of September or beginning of October. However, in the Vidin area in north-western Bulgaria, the grapes achieve technological maturity earlier – around September – because the accumulation of sugar is more intense. In general, Gamza thrives best at windy hills with rich soils. Because of the thin skin of the grapes, they are prone to developing fungi such as grey mould. For instance, if the autumn is quite humid, the grapes tend to get this disease. Thus, Gamza requires a warm and dry autumn in order for the wines to be of good quality. Gamza is not particularly resilient to low winter temperatures, although it prefers cooler climates which is the reason why it is mostly cultivated in northern Bulgaria.

The wines from Gamza are full-bodied and harmonious, but their quality is highly dependent on the climatic conditions, especially in the autumn. When the autumn is dry and warm, the wines from Gamza have a vivid, although not very dense, ruby colour, a pleasant taste of small red fruits, most notably raspberry, distinct freshness and delicate tannins.

Gamza is a highly localized grape variety mainly cultivated in the north and especially north-western Bulgaria. Gamza is rarely found in southern Bulgaria and is one of the less popular local grape varieties for the mass consumer. Nevertheless, despite the high dependence on climatic conditions in the given year and their effect on the wine, Gamza wines remain an integral part of Bulgarian wine and vine heritage and plays an important role in the viticulture of north-western Bulgaria.